White celebrities including Sarah Paulson, Julianne Moore, Justin Theroux, Stanley Tucci, Aaron Paul and others partnered with the National Association for the Advancement of Coloured People (NAACP) for a new video which urge people to speak up when witnessing racist comments or actions rather than turning a blind eye to them. 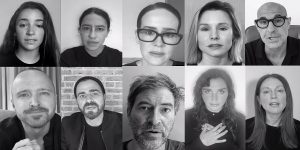 The video has received commendations as well as criticism in equal measure on social media; several people have criticized the video and urged the celebrities to support the Black community with clear actions instead.

‘’Open up your purse and donate to black and POC groups doing direct work on the ground. Call for demilitarising + defunding the police and use the funds for genuine protective services, and for free universal healthcare and education and housing. That’s how you take responsibility.’’

Another commentator wrote: ‘’I encourage each of these actors to hire a team of BIPOC feminists knowledgeable on intersectionality to review and advise them on script choices. No more white saviour films, racially tokenized roles, and stereotype perpetuating shenanigans. Take responsibility AND take action.’’

To this commentator, it’s a no win situation for the celebrities ‘’While I admit it’s almost impossible for celebrities to win in these instances (silence = part of the problem, say something = tone deaf lip service), not making overly dramatic performance pieces that seem totally self-serving would probably be a start.’’

NIGERIA: DSS Denies Magu’s Arrest July 6, 2020 • Blog • No Comments Contrary to reports making the rounds on social media, the Department of State Services (DSS) has denied the arrest of the acting chairman of the Economic Financial Crime Commission (EFCC), Ibrahim Magu. In a press issued in A...
View on Facebook
·Share

ANGEL BRIDE: A newlywed Nurse who stopped to help an accident victim in her bridal gown has become an internet sensation. lnkd.in/dWWCVRh

SUPER SPREADER: The groom at a Covid-19 lockdown flouting secrete wedding has died while at least 80 guests were infected with the coronavirus in India. lnkd.in/dPcDKQ4

GRATITUDE: 180 German frontline staff including medical staff, police officers and supermarket workers who worked through COVID-19 are on a free holiday trip to Greece. lnkd.in/dsQDHZV

Maya More Secures Release Of Wrongfully Convicted Man In Missouri July 3, 2020 • Blog • No Comments It was an emotional meeting on July 1 as Maya Moore fell to the ground when she saw Jonathan Iron, a man she put her thriving professional WNBA career on hold to ensure his wrongful conviction is ...
View on Facebook
·Share

BRAVE BLOOD: Daughter of a GOP candidate begs voters not to vote for her Dad because of his denial of systemic racism. lnkd.in/dpMJ4KJ

BLIND LOVE: War of words over Novak Djokovic Covid spread as Dad blames another player for the irresponsible act of the world no1 player. lnkd.in/dwRWmRY

NOT IN OUR NAME: Make Viral: Reading stabbing NOT Linked to BLM protest contrary to initial media reports. lnkd.in/dcWm2yW

Daughter Of GOP Politician Begs Voters Not To Vote For Her Dad June 26, 2020 • Blog • No Comments Stephanie Regan, the daughter of a Michigan Republican candidate Robert Regan may have wreaked her father’s campaign with a single tweet that begged residents not to vote for her dad. The twitter ...
View on Facebook
·Share